Revving Up: The Honda Beat, A Classic JDM Roadster 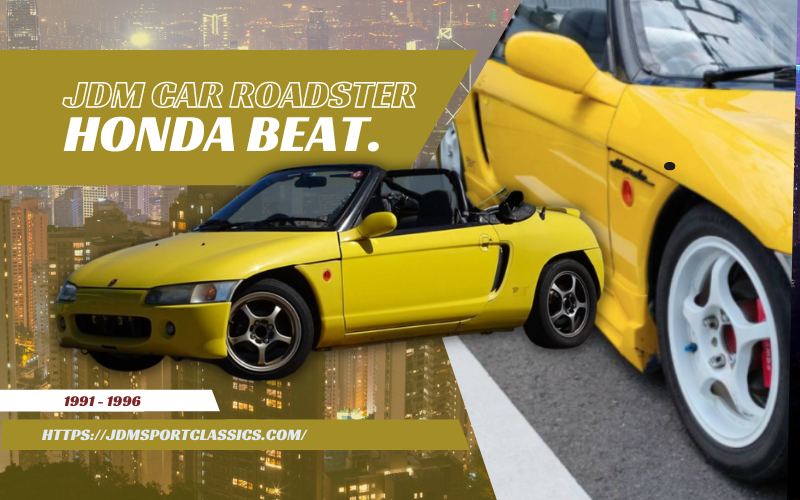 The Honda Beat is a car that holds a special place in the hearts of many car enthusiasts, particularly in Japan. It’s a small, two-seater roadster that was produced by Honda from May 1991 to February 1996. During that time, Honda manufactured around 33,600 units . The production numbers were limited because of the restriction on engine displacement on kei class cars, which is why it is considered a rare and collectible car today.

Despite its short production run, the Honda Beat has left a lasting impression on the automotive world and is still considered one of the best Kei cars ever made. In this blog post, we will explore the reasons why the Honda Beat is such a beloved JDM car.

The Honda Beat is a small car, measuring just 135 inches long and 55 inches wide. It’s designed by the famous Italian design house Pininfarina, which gave the car its sleek and minimalist look. The front of the car features a small grille with a Honda logo in the center and a pair of round headlights. The car’s hood is short and slopes downwards towards the front, giving the car a sporty and aggressive look.

The car’s profile is dominated by its long doors, which are curved and give the car a unique and aerodynamic look. The car’s roofline is also distinctive, with a slight arch that gives the car an overall “hatchback” like look. The car’s rear is also unique, featuring a small spoiler and a pair of round taillights.

The car’s most recognizable feature is its folding soft top, which can be easily stored in the trunk when not in use. The car was available in a variety of colors, giving buyers a range of options to choose from. Overall, the Honda Beat’s design is simple yet elegant and its small size and unique styling make it stand out on the road.

The Honda Beat is powered by a 660cc E07A motor which is DOHC inline three cylinder engine with Honda’s Multi Throttle Responsive Engine Control System, which produces 63 horsepower at 7,500 RPM and 45 lb-ft of torque at 6,500 RPM.

The engine is mated to a 5-speed manual or 3-speed automatic transmission, and the car has a curb weight of around 1,600 lbs. The car’s small size and lightweight construction give it a power-to-weight ratio that allows it to reach a top speed of around 110 mph.

The Honda Beat’s handling is what sets it apart from other cars in its class. Its mid-engine layout, which places the engine behind the driver, gives the car a low center of gravity and improves its overall handling. The car’s suspension system is also noteworthy, as it features a double wishbone set up in the front and rear. This suspension setup gives the car good road-holding abilities and makes it easy to handle at high speeds.

The Honda Beat also comes equipped with four-wheel disc brakes, which provide good stopping power and make it safer to drive. The car’s small size also makes it easy to manoeuvre in tight spaces, which is an added bonus for city driving.

Overall, the Honda Beat’s performance and handling make it a fun and enjoyable car to drive, which is something that is not often found in cars of its class.

The Honda Beat was only produced for a short period of time, and as a result, it has become a highly sought-after collector’s item. Its unique design, mid-engine layout, and sporty handling make it a desirable car for enthusiasts.

Additionally, the fact that the car was designed by Pininfarina, a company known for designing some of the most beautiful cars in the world, adds to the car’s desirability.

The Honda Beat’s legacy in the automotive world is undeniable. It was ahead of its time in terms of design and engineering and was a trailblazer for other small, sporty cars. The car’s mid-engine layout and sporty handling were unusual for a car in its class, and set it apart from its competitors.

The Honda Beat is a perfect example of how a small, simple car can make a big impact and it serves as a reminder of the magic that can be created when engineering and design come together in perfect harmony.